Harmon Carson, a contributor to tradgeeks, killed a monarch in Louisiana’s late season. I asked him to share his story.

“Look at this ugly buck” I said holding up a camera to my brother. “He’s got the rack configuration of a caribou or reindeer.” This young two year old buck had main beams that went straight in the air and curved over his face. The way his short tines grew on the top of the tall beams and his long brow tines stuck out over his nose, he reminded me of a reindeer. “I’m gonna name this guy Rudolph.” It only seemed fitting for this little cull buck. Throughout the rest of the 2010 Louisiana season, I kept getting pictures of Rudolph. Then the season came to a close and I never saw him again. 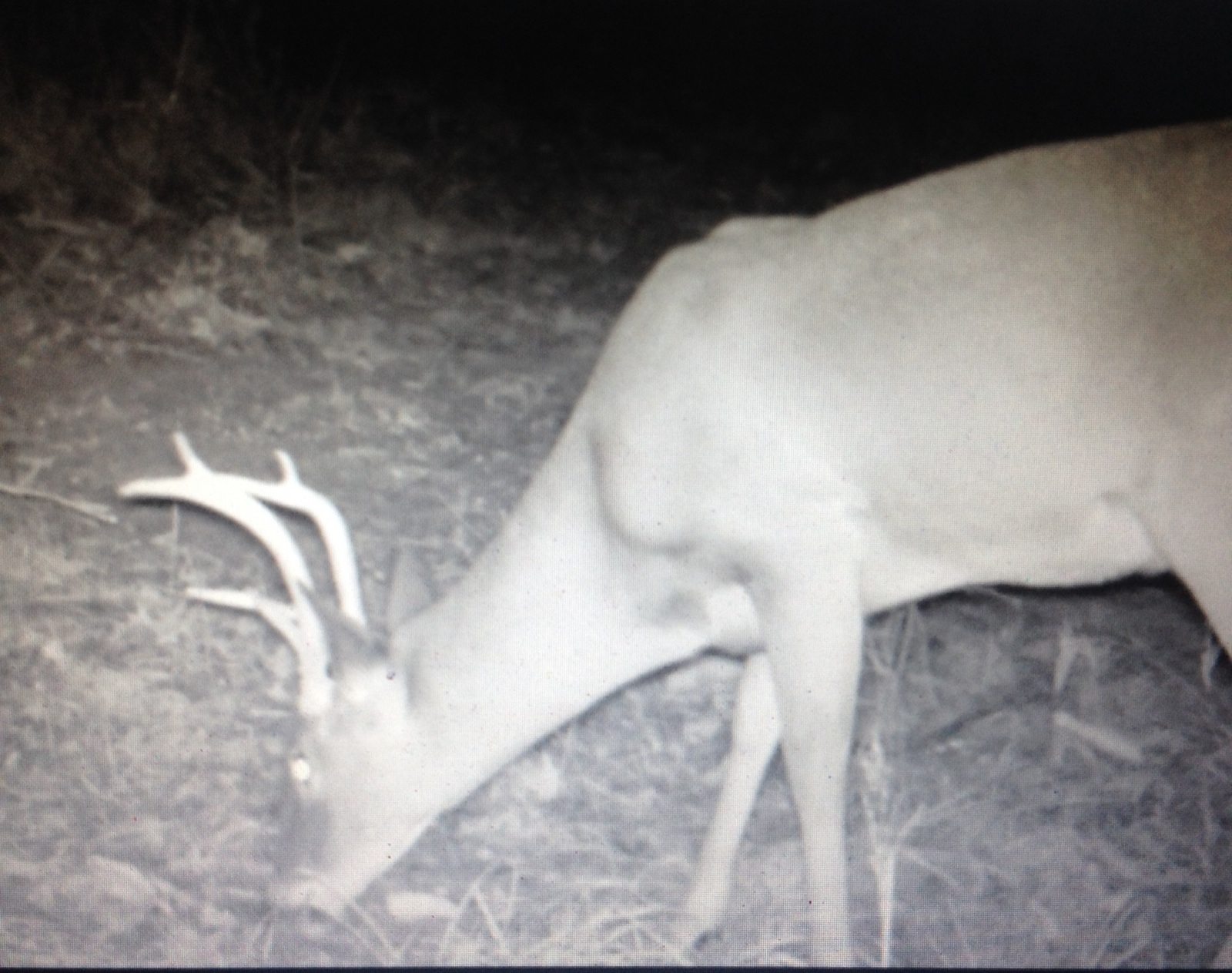 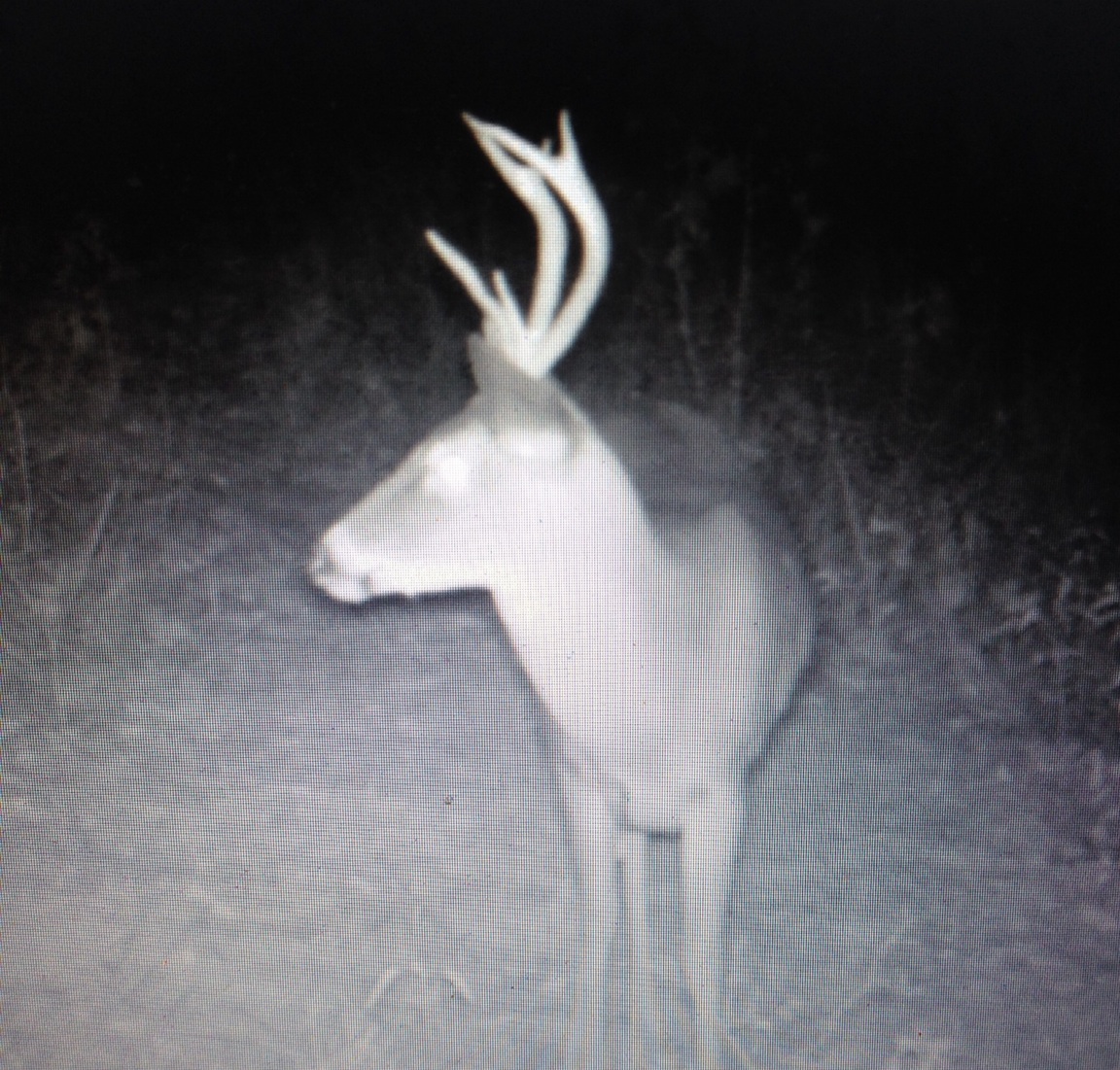 Mid November of this past 2013 season my dad came to me and said, “I just had a new tall cull buck show up on me.” Looking at the pics on the computer screen, I immediately recognized him as Rudolph. My quest to get this old cull out of the local herd ensued. As the rut and the 2013/2014 season dwindled down, my hopes to kill Rudolph only increased because he was becoming more and more consistent at my bowstand, but I only had a week left of season…

The harsh wind cut through my scent-lok clothing like it wasn’t even there, causing a shiver to jolt through my body. ‘I need to go get another jacket’, I thought. But there was no time. I had just arrived home from work and only had about forty-five minutes of daylight left to make something happen on the only afternoon I could hunt that week. After all it was the last week of the Louisiana bow season. Time was of the essence. I had rushed inside just long enough to grab the bare minimum of a thin fleece jacket liner, my scent lok clothes to put on over my work uniform, my recurve, and then ran back out into the thirty degree weather. The little bit of clothing I was wearing would have to do as my feeble attempt to stay warm. By the time I turned off the atv a few hundred yards from my tree, I was already regretting not taking an extra minute to grab a heavier jacket.

My stand is in a bottom between the point of a steep hill and a bayou that borders our property. It is a prime funnel that deer naturally travel through. A few years ago when the gas boom hit northwest LA, they laid a pipeline through our property and it ended right at my deer stand before they drilled under the bayou. I was distraught thinking the oil and gas industry had destroyed my favorite hunting spot and cut down my stand tree. I soon discovered they had actually helped me. They stopped clearing a few yards shy of my tree. The pipeline protruding into the woods created an even more defined funnel than what was already there, plus they opened up a great place for me to plant a small food plot. I have killed more deer, and notably more bucks, from this one location than any other stand I have hunted.

My thoughts were racing as I turned my face against the wind, flipped my collar up to shield my neck, and rushed off towards my tree. I slowed my pace when approached the top of the hill where I could see into the bottom under my tree. It was prime time for deer to be moving and I needed to be careful. Peering over a terrace in the pipeline, I immediately saw antlers and the form of a deer’s body. “No! I’m too late!” I screamed inside myself. Rudolph had been showing up right at dark. I assumed the colder weather and high winds had gotten him on his feet a little sooner than usual.

Upon further observation, I realized this was not my target buck. It was a very nice, respectable three year old buck. He was a heavy main frame eight point with matched split brow tines that made him a ten point. I had passed him a few times previously in the season and did not intend to shoot him now. Though he would be a great bow kill for anyone especially with a trad bow, I also knew he would be an incredible buck next year. At this point he stood between me, my stand, and my date with Rudolph. I slowly worked my way down the hill all the while keeping willow trees and brush between myself and the buck. I had to get to my stand and knew I was going to have to spook this one deer to do so. I decided to spook him in a manner that only confused him and did not make him scramble for the next parish. At forty yards, he looked up and I let him see me through the brush. The wind was whipping hard and had every branch and twig thrashing erratically. I knew this would help my current endeavor. I continued my approach very slowly. As soon as the buck saw me, I stuck one of my arms out the side and very slowly began raising it up and down. He stared motionless not sure of what he was looking at. The closer I got, he became more uncomfortable until he finally turned and trotted off into the woods north of my stand. Perfection. That only killed about five minutes of precious daylight.

Immediately after the buck retreated into the woods, I was climbing the tree to get into my stand. I quickly nocked an arrow tipped with a Simmons landshark and settled in for a cold evening. The wind was not in my favor but it was all I had to work with. It was blowing harshly from the north and I was facing south looking over the clearing where I usually put in a food plot. I knew Rudolph almost always came from the north on a trail that was twenty-five yards away and I was hoping to catch him before he got down wind. It wasn’t long before I heard the slow methodical crunching of footsteps falling in dry leaves. These steady determined steps were coming down Rudolph’s trail. I caught a glimpse of antler and my heart began to race. When the buck immerged from the brush I was disappointed. It was the young ten point I had just run off when I arrived at my stand. ‘Oh well it’s a live decoy’ I thought. He did not hang around though. He walked across the clearing, stopped for a minute or two to look around, and then continued southward.

The light was fading quickly and the wind seemed to die down some, when over my left shoulder I heard deer walking. I turned to see bodies coming towards me through the bare winter trees. It was a doe and a young five point. They walked under my tree and into the clearing to feed. It wasn’t long before the five point suddenly became nervous and quickly walked to the other side of the clearing. I thought I’d been hearing more footsteps, but with the wind stirring things up I had assumed it was just the wind. Years of bowhunting experience told me what to do when the little buck threw me a hint of what was happening. I reached for my bow and slowly turned my head towards the direction I heard the leaves crunch. Sure enough Rudolph was there on the trail closing the distance and had already passed my shooting lane! My heart was pounding as he headed straight downwind of me. He paused momentarily on the edge of the clearing to take in the situation then walked steadily towards the two deer in front of me. At this point all three deer were downwind of my tree and not one of them seemed concerned about anything, except of course the nervous five point who was keeping a close eye on Rudolph.

It did not take me long to optimize on my situation. As soon as Rudolph walked into the clearing at eighteen yards and lowered his head, my string was already on its way to find it’s anchor point on my face. Thumb behind the ear, feather on the nose, eyes burning a hole through Rudolph’s chest… the tension on my string increased slowly until I felt a release of pressure off of my fingers and my arrow was on its way. As I released the string, Rudolph immediately reacted and began to spin away from the noise he heard. The landshark found its mark at the back of the ribs and ate its way through both lungs and exited just behind the offside shoulder after splitting a rib. He dropped his head and crashed hard through the brush. At forty yards I could hear him wheezing for breath as his lungs filled with blood and I knew I had hit him hard. Suddenly a loud crash and all went silent.

I was still staring in the direction Rudolph had crashed taking in the scene when I realized I had a huge smile on my face. Excitement set in. He would not score much of anything but I had just killed the most mature buck I had ever taken with my recurve. The true “trophy standard” in my book is age. A five year old cull had fallen to a stickbow and I couldn’t have been more pleased. I climbed down with numb fingers from the cold and shaky legs from excitement. It did not take long to pick up the blood trail. It looked like a crime scene had taken place and in fact, it had. The bloody pathway led on for eighty yards where I found Rudolph waiting for me with all of his ugliness. I called my dad and brother and told them the usual corny hunting joke that you hear around the holidays, “Christmas will be postponed next year. I just killed Rudolph!” Except this time it was true and I couldn’t be happier.