After talking to other traditional hunters, reading articles, and observing others set up their hunting spots, I’ve come to the conclusion that most people have difficulty being successful with traditional gear because of their stand setups. Most traditional archers are introduced to shooting traditional gear through years of hunting with a compound bow. Since we are creatures of habit, we tend to use the same setups for hunting traditionally as we do when we’re hunting with a compound. This is, more often than not, faulty judgement.While it is still bowhunting, traditional bowhunting is a completely different animal than hunting with compound bows. The speed, accuracy, and distance capabilities are not nearly as easy to obtain with traditional gear. This is where stand setup becomes critical. Here are a few tips I’ve learned from personal experience. 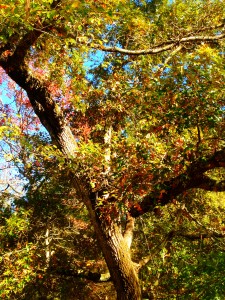 I. Don’t be afraid to get close. Just because you can accurately hit a softball sized target every time at 30yds, doesn’t mean you need to plan on or try to shoot at a deer at that distance. I can accurately shoot my compound bow at 70+yds, but I don’t set my stands up where I’ll be shooting at those distances. Even with a compound, I try to have my shots less than 30yds. If a deer can duck an arrow going 315fps, you know they can duck one going 185-215fps. I shoot accurately out to 25-30yds with my recurve, however most of my traditional set ups are positioned in a way that the animal has to come 12-15yds from me. Nearly every animal I’ve taken has been under 15yds. Setting yourself up for close shots increases your odds, because it dramatically increases your margin of error. The animal doesn’t have as much reaction time, and if you happen to flinch or fail to pick a spot, the arrow will not be as far off its mark as it would at a farther distance. I personally want the animal as close as possible. The second animal I ever shot at with traditional gear was 22yds away. When I released the string my heart skipped,  because I could see the arrow flying true to a double lung impact. But as if in slow motion, the young buck dropped like a sack of bricks and I saw my arrow barely miss the hairs over his back. Lesson learned. I have since killed a whitetail buck at that distance but I aimed very low, almost off of the body, so the deer would drop into my arrow. It worked, but I don’t like playing that card when I’m hunting. I want as much of an advantage as possible over the keen senses and reaction times of a wild animal. 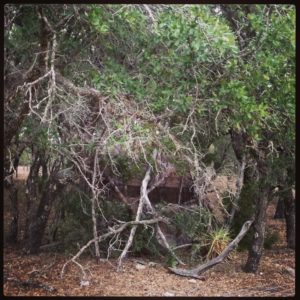 II. Don’t be afraid to get low. When I hunted with a compound, I was always trying to set my stands at least 25′ up in a tree because I never got busted by deer. It gave me more freedom of movement and I got away with a lot more. Very few of my treestands are over 15′ now, in fact, I hunt off the ground more often than not. Doing this allows the arrow to hit more vitals on its way through the animal. Usually your entrance hole will be much lower as well. On a shot where the arrow doesn’t give you an entrance and exit wound this is important, because the blood trail will begin much sooner than it would with a high entry. This usually results in quicker recovery of game. Keeping your stand setup low also keeps the arrow from hitting at odd angles on bones that could hinder penetration.  Another benefit of staying low is it allows you to keep good form. If you’re too high in a tree and try to draw on an animal, it tends mess up your shooting form an often time causes you to short draw. This kills accuracy and penetration. You have to bend at the waist and it can be very awkward and mess up your muscle memory and concentration. The first deer I ever shot at with traditional gear was only 6 steps from the bottom of my tree, and I was around 26’ high. I bent over, hit my anchor, and shot. I remember seeing that arrow seem to  nearly bounce off the deer. I only got broadhead deep on the back of the shoulder with a 60# longbow. I did not realize that in my contorted form caused by shooting at such a steep downward angle, by the time I hit my anchor I had only drawn my bow maybe 8-10” tops resulting in a deer with a sore shoulder and me with a sore ego. Keep your stands low. 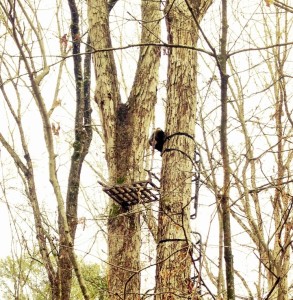 III. If you’re going to be close and going to be low, you have to make sure you have good cover. Back cover on tree stands is more important than having brush in front of you, because it breaks up your outline. I’ve seen where the brush in front of the stand is so thick that from the ground you can’t see the stand itself and from the stand looking down it seems great. But if you have someone sit in your stand and you get on the ground and look up, they’ll stick out like an olive on a toothpick. I will frequently pull limbs and brush up the tree an ziptie them around my stand to provide more cover. I had to do this in Colorado hunting mule deer. The best tree to place a stand had no cover, so I made some by tying limbs around my stand. It worked beautifully. I took a 2yr old 4×5 at 12yds and with the way the mountain sloped up he was almost eye level, but he never suspected anything. Back cover is always most important. If the woods you hunt in don’t have many low limbs and they’re all straight, clean tree trunks till you get up 25-30′,then try to find a tree that forks. Place your stand at the bottom of the split angling towards the other trunk so that you are between the trunks and all outlines are kept within the split of the tree. If you’re hunting from a ground blind, try to find a place along the trail where there is already a “blob” or brushy place in the woods. Try not to set your blind up in wide open trees, especially if the camo pattern is dark. If it sticks out and looks unnatural to you, it most likely will to deer as well. Fallen down trees (the top limbs or the root systems), brushy trees like cedars or spruce, and heavy vines growing up into trees are all great to break up the outline of a blind. 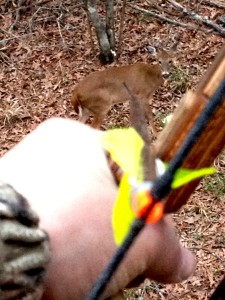 Everyone has their own personal preferences on stand setups and every setup will be different, depending on habitat, terrain, and species hunted. However, these are proven methods for me. I can guarantee you that when I set up a new stand for hunting with traditional gear, I will be close to game, low to the ground, and covered up.