On September 25th, we finally packed up all the gear that we had been preparing all summer long for a 24 hour trip to South Dakota.  My buddy and I have been waiting a long time for this day to come.  Saying good by to our families is always difficult.  However, the chance of killing a bomber mule deer with a stick bow was overwhelming us with joy.

We headed down the highway crushing state by state drinking Rockstars and Redbulls, and eating jerky; listening to my buddy’s choice of music (I really do question his manhood sometimes!) The miles were passing by quickly with anticipation.  We finally got into the state of South Dakota and made a quick pit stop at Cabela’s.  We grabbed a few last minute things and headed for our destination.  Through a good friend of mine, Jared Bloomgren, and countless hours studying aerials, we picked a piece of WIA that supposedly holds some really good deer.

After some unexpected detours in the middle of nowhere, we finally reached the WIA with temperatures in the 90’s.  I know what you’re thinking, and trust me we were thinking the same thing.  We quickly loaded ourselves up with our 50lb packs and headed to the location we had decided to set up our base camp. For your information, if you are headed to South Dakota you can only camp on the Bureau of Land Management Properties.  We luckily had a small piece of BLM surrounded by WIA.  After a 4 mile hike in 90 degree heat, we finally reached a good spot to set up camp, our camp consisted of a 2 person bivy tent.  Once we got our tent set up, we headed to the nearest vantage point and started to glass.  The coyotes were howling and the sunset was absolutely beautiful.  Unfortunately, the heat was so extreme the deer were not moving until dark. 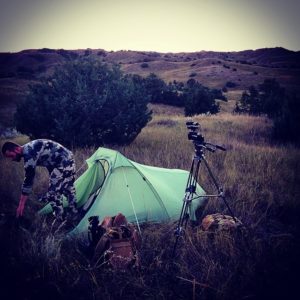 We spent three days out in that WIA covering up to 30 miles searching for a good buck.  We hunted hard, but the heat literally killed us.  There was zero deer movement, little sign, and we were drained.  Mark and I discussed our options and came to the conclusion that we needed to pack up camp and head further west to some areas that I have hunted in the past.  The next morning, we decided to give it one last go.  We hiked approximately 2 miles to a vantage point to glass before sun rise and failed once again.  What took us almost 3 hours to get to camp from our car, took us one hour to pack out.  We were excited to head west, to say the least. 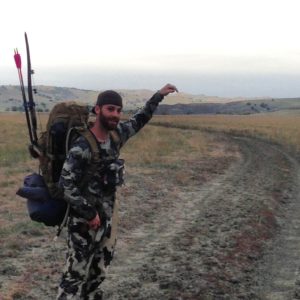 Another, FYI don’t rely on the platypus gravity flow water filtration system primarily.  In the area we were in the water supply was low.  However, we had some decent sources.  The water tasted like shit, seriously!  The one day I hiked all the way back to the car in 90 degrees, just for some fresh water.  That was 8 miles round trip, with a case of water on the way back in.

Three hours later we reached our next location.  This was a location that I hunted the prior year and saw some really good deer.  However,the spotting and stalking is not ideal.  With the cards we have been dealt, we were willing to give it another go.  Immediately, we headed out to a vantage point that I knew we should see some deer from and glassed 9 doe right off the get go.  The next three days were supposed to be nothing but rain, and rain it did.  We spent that night sleeping out of the car and hunted hard in the rain and fog all day.  Everything we owned was soaked through, which made us come to our next decision.  Do we continue to rough it out? Sleep in our tent for the next 2 days in wet gear?  Or get a motel to dry things out?  It was a simple decision for us because we came to hunt.  Roughing it is a blast, but we felt getting dry to hunt hard the next day was our better option.  We found a cheap motel and regrouped.  Showering for the first time in 5 days felt amazing and to put on dry clothes felt even better.  The next morning we headed back out to the same canyon.  I glassed all morning only to see a few mulie doe and a small buck.  My buddy saw a decent 3×3 working a side hill but he couldn’t catch up to him.  At this point in our trip, I was completely frustrated.  We needed some sort of break.  I was telling myself “one good stalk at this point and I would be happy.”  Next thing I knew my phone was blowing up, it was my dad.  The typical conversation took place for any father and son that are extremely good hunting partners. My father went on this trip with me last year and we had a blast.  However, he elected to stay home this year.  With all the pictures I was posting on Facebook, it must have gotten the best of him, because he started to scout for us using Google Earth. Before I hung up the phone my dad said, “I think you should check out these two areas they look really good on the topo’s and aerials.” I said, “okay dad we will try,” but really thinking, “Dad you’re over 1,200 miles away, scouting for us on Google earth and we are here. Lots of places look good on Google Earth.” 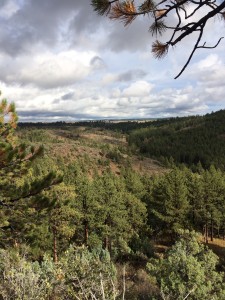 Tuesday, we decided to hit up another spot that I hunted in the past but had little luck.  I told Mark, “I don’t know what else to do man; let’s check out those two spots my old man told us to check out.”  Mark being Mark said “I am down bro.”  Mark is an awesome hunting partner we really get along well in the woods, on the mountain… where ever really.  We both have the same drive and that is what it takes.

That afternoon we headed up the butte; it was a 2 mile hike to the spots my father mentioned to me.  The terrain to me on the aerial looked too thick to glass.  I was not feeling confident at all.  We finally reached the top of the ridge, and I said, “Look at this crap! Thanks a lot dad; I can’t see shit.” As the rain continued to blast us, I was once again frustrated as hell.  Mark, on the other hand, was full of joy and having a blast.  We have two completely different personalities and it works really well in hunting situations. Mark said “We are here, bro we might as well check it out.”  I am not joking we walked 50 yards down into basin, and I spotted a bomber feeding to our right at 150 yards.  I grabbed Mark’s jacket and down we went.  My emotions quickly turned to, “thank you Dad thank you thank you.”  Father knows best, right?  Unfortunately, with all the rain all of our camera gear was left back at the vehicle.  We watched this buck for about 45 minutes and he bedded in a perfect location.  I was on deck to stalk in on this beautiful 5×5.  We continued to watch him for a little bit in his bed, just trying to plan my moves.  It was go time and this was a super short stalk; I could actually pull this off.
I worked down the backside of the ridge and threw a draw to the bottom, just below and downwind of his bed.  I had a hard time deciding how far up the other side hill he was bedded.  I took every step with caution, and the rain was finally helping me out in this situation.  I got to a point on the side hill and sat down to catch my breath and calm my nerves.  I was thinking at this point,  “I am 60 yards, tops.”  Eventually, I inched my way in a few more yards and a few more yards.  At this point I started to second guess myself but my gut was telling me he was close.  A few times throughout the stalk I tried to find Mark but failed.  My nerves were starting to get the best of me.  “He has to be close, I think that is the tree he was bedded under.”  I pulled up my range finder clicked the button and felt the wind hit my neck.  I immediately thought “OH NO” and read 29 yards.  Lowering my range finder I saw him walking out the trail he came in on.  I hunkered down.  50 yards, it’s now or never.  I drew anchored, back tension, back tension ……………………… looks good…………. the arrow fell just short, almost taking off chest hair.  The mulie of a lifetime with a stick bow, hopped gently out of sight.  I hung my head in disappointment, but man was that fun!  That was the best opportunity I have ever had at a mule deer of that caliber.
We continued on and with in ten minutes we were on another good deer.  This particular deer was in a bad spot and we should have waited but the anticipation got the best of us.  Mark was up to bat and he started to make some moves on another good mulie.  After the stalk was over, we both said that was stupid and we learned from our mistake.  The day was starting to get long and we headed back for the car.  We knew where we were headed in the morning, that is for sure!  I had a difficult time sleeping that night because I blew that opportunity.  It was a super long shot for a stick bow, but I am confident in myself and don’t second guess that shot to this day. 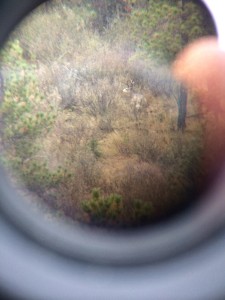 Wednesday, we got into some more deer and I had a decent stalk on a good 4×4. The weather was finally starting to clear up and I was really enjoying myself. We hunted hard that day and spotted some decent bucks through out the canyon. On our way back for the day Mark and I had a few mulie doe’s work down in front of us at 20 yards. Mark decided that he wanted to take a doe, and that he did. He ten ringed this doe at 20 yards and she piled up within 60 yards. He went balistic, this was a first in many ways for him. It was his first archery kill, first trad kill, and to boot first mule deer. We had a blast that night taking care of this mature doe and celebrating. I was beyond stoked for him, he deserved that deer in so many ways. We ate well that night and even had a few PBR’s to calm us down for the night ;). 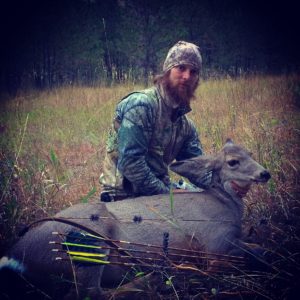 I could go on and on about the ups and downs of this trip.  We learned a lot, shared a lot, and most importantly, created a pile of memories.  I personally want to thank Mark for taking on this endeavor with me.  It is really difficult to find a good hunting partner these days.  People can be selfish and greedy; it’s important to always remember it’s not about what’s on your wall but the memories you create. I may not have put my tag on a mule deer in the past two trips that I have taken out west. However, I am satisfied and will get redemption someday and it will be that much more rewarding.

I have a lot of people ask me why I would travel so far to hunt with a stickbow, knowing that my chances of harvesting a deer are slim to none? I reply with because that is not what matters to me. People that are asking those questions or thinking them just don’t get it, do they? 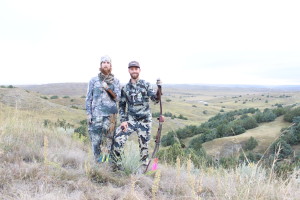