It was the spring of 2011. I had been busy with college work during February and March, unable to scour the woods for sheds in a relatively new piece of woods that I had been lucky enough to secure permission to hunt. I had decided that on Good Friday, which was a day off for me, would be they day that I headed out for what my Aunt Fay called “woodsing”.

Now in my region, temperatures had already been steadily above 60 degrees, which meant that the undergrowth had started to grow up and the new leaves had significantly reduced visibility in the woods. It also meant that ticks, chiggers, and mosquitoes had already began to overtake my favorite areas. So armed with a half a can of deet that I had left over from the previous year, my dog and I loaded up and headed off for a day of rummaging through what nature had left for us to find.

The new piece of woods I had picked up contained about 50 acres of thick growth that had been clear cut about 5 or 6 years before. I was certain that this was an area that I would likely find evidence of deer beds, trails and hot spots for this years stand setups. The pines were relatively short and so thick that movement required the hand and knee approach. The thick leather work gloves and brush buster jeans paid off big time this day. I worked myself toward the far back edge of the property and began working search grids in the thick.

The dry deer droppings were thick, old trails readily evident, and not much of anything for the deer to eat in the dense cutover. By this time, I knew that the deer had moved off to areas where the wheat was tender and green. Some local fields had already been planted with peas and are a favorite for grazing deer in the spring. With each completed crossing of the pines, I continued picking out possible stand sets in the bordering hardwoods.

I an area close to the center of the property, I found an open space with a few holly trees and very few pines. I could see 15 or 20 yards ahead and to my disbelief, I found a set of beautiful sheds that looked like a buck laid down to sleep and dropped them off each side of his head before getting up. 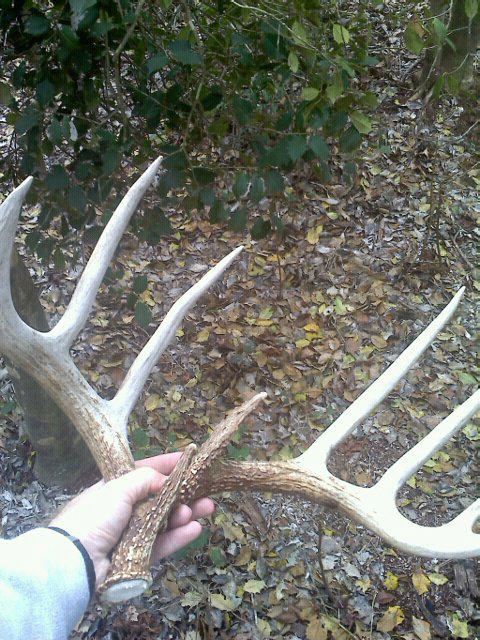 The antlers had 9 points, including a crab claw on the left side. In my mind, I couldn’t help to think this was probably a 3 year old deer and maybe 20 inches wide. I was excited with the thoughts of the upcoming season. These were the only sheds that I found on this outing (I found others later) and needed to head home for some other chores that I had been dragging my feet on.

In late August, I started with stand sets and trail cam deployments in this section of woods. Through the early season, I had seen no sign of this buck on foot or on trail cam. I had plans to take off the first two weeks of November to bow hunt. My Brother in Law had been promising to come down and hunt with me if he were fortunate enough to get his archery buck in Pa. On Halloween, which was a Monday, he had gotten off of work early. In that I had not been seeing much of anything at my current sets, I decided to grab my climber and roam some other areas in search of sufficient sign that might prompt me to hunt there.

I located a couple of fresh scrapes and light rub line in a briar infested area with just about no climbable trees. I was able to locate a medium sized gum tree in close proximity to a large holly. In about 45 minutes, I was able to cut my way to a half decent perch that looked over the scrapes and an active trail. Within 30 minutes, I could hear a deer pushing through the thick briars and headed my way. When the buck appeared between the short pines, I realized that it was a mature buck. Like on cue, the buck stopped with all his vitals in the wide open at 15 yards. I had already been at full draw thinking I might have to stop him with a bleet or whistle. I took advantage of the opportunity and let ‘er eat!. The buck ran off through the thorny jungle and expired within 40 yards. 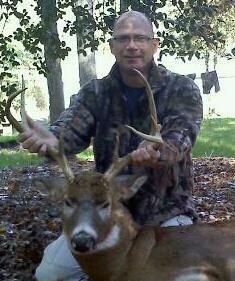 Even though this was the largest buck that I had taken with the bow, it was not the whopper I had been pursuing. Fortunately, I have two buck tags so the hunt continued.

By that Friday morning, I was back in the stand. I returned to a set up that was close to the spot I had recovered the sheds that spring. About an hour after day break on a frosty and silent morning, I again heard the sound of a deer pushing through the thick. The deer pushed into the short pines less than 15 yards from me yet I couldn’t see him. He remained there for what seemed to be an hour before he stepped into a clearing less than 10 yards from me. I had been at full draw since he stepped out but let off when after careful study, determined that this deer, only 16 inches wide, was not the one I was after. Besides, my Brother in Law had taken his buck in Pa. and was packing to join me for a week of hunting. If I shot this deer, I would be a mere spectator for a week. I pulled out my phone and took pictures of this buck at less than 10 yards for about a minute before he slipped off into the hardwoods. 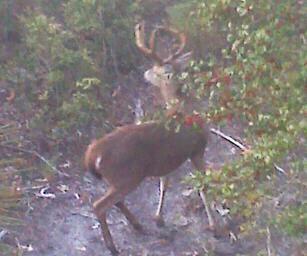 By that evening, my hunting partner had arrived. I shared my experience of that morning with him along with the pictures I had taken. After showing him the sheds I had collected that spring, my partner, much more experienced in the woods than I, gave me that look that says “you’re an idiot!” He showed me the similarities in the sheds and the picture. Although the buck was no more than 16 inches, he was a beefcake and tall.

We finished the week of hunting with a nice buck for my Brother in Law to take back but not another sighting of my boy.

I finished the year without another sighting and no sheds the following spring. I had chalked him off to a kill for a neighboring hunter but on Election Day of 2012 at about 9am, he appeared behind a hot doe over 45 yards away. The sighting was only about 5 seconds before he disappeared but there was no doubt it was him…only bigger now.

The spring of 2013 netted no sheds despite the vigorous attempts to locate them. During the first week of September, a neighboring property owner (and hunter) who had also seen him on the hoof, sent me a picture of a road killed deer less than a half mile from my spot. The picture caused my spirits to descend to a low place. 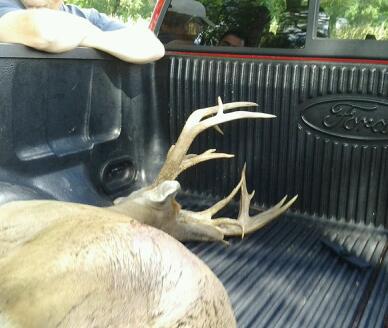 My “reason for the season” was now in the bed of some other guy’s truck, taken out by chance or accident and not by fair chase and skilled encounter. My season would have to take on new focus and new direction. There is no other way to describe the end of my passion for this deer other than “a tough break”.